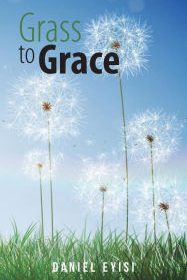 In Daniel Eyisis’ novel, Grass to Grace, a poor Nigerian man carves a path to respectability—with the help of a few close friends.

Odinakachukwu (Odin) Ndukaku was orphaned when he was just a boy and, despite wrenching poverty, has somehow cobbled together an existence. The novel opens to the young man worrying about the leaky roof in his small hut, a situation that does not go unnoticed by his close friend, Ndu.

Soon, Ndu donates a few yam seedlings to his friend and enough material to repair his hut’s roof. And before long, Odin boasts of a small but thriving patch of land and earns enough money to get a better zinc roof for his home. Ndu and other village friends band together to help Odin, pitching in with the roof construction and other odd jobs around the house and even finding Odin a wife. The novel ends on a high note with Odin’s accomplishments far exceeding anything he could have ever dreamed of.

The story aims to emphasize the value of hard work and friendship, but it’s told in a staccato style that gets mired in detail, losing track of the larger narrative. It’s hard to even discern where the novel is based, the only hints being a glancing mention of Igbo culture and Nigerian-sounding names. Meanwhile, the long parade of characters—major and minor—further bogs down the narrative.

And while Odin achieves big successes later on, these accomplishments are breathlessly recounted in just the last two pages, with most of the rest devoted to plodding descriptions of carpentry and villagers going in and out of each others’ homes, drinking palm wine.

This heartfelt tale about a man’s struggles is anchored in good intentions but would be better served with a more tightly knitted story arc and a stronger sense of place.