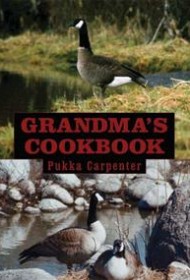 Grandma’s Cookbook is a book filled with dialogue and fragmented thoughts. What it is not, despite its title, is a cookbook.

Grandma’s Cookbook is an oversized book (8’X11’) filled with prose that often references food, but readers won’t find recipes here. What they will find, instead, is an enigma: This book appears to be a novel but also contains family photographs and artwork that might indicate a memoir. There is no explanation of how to interpret the material, either on the back cover or in an author’s note.

The prose does little to sort things out.  Consider the opening line of the Preface: “Jerry’s wife lives slightly west of Priestly Mountain. Flying colorful Hecliff down to stalker’s paradise, Lake Chemquassabamticook’s glass lake-house, Marlene combats motion sickness.” While usually a preface helps orient readers, this does the opposite, containing references to Jesus Christ, various food items (“Savory lamb chops’; “Fleshy veal cutlets”), women pilots, and so on, but no traceable line of thought.

Further complicating matters is the book’s format: Passages are written in varying colors — red, blue and purple, green and brown.  This visual disarray only adds to the reader’s disorientation.

In all, Grandma’s Cookbook is a puzzle. Readers will find glimmers of interesting drama here and there (“Simply have no spare time to waste foolishly. Must consider a future. Carol is my entire life right now. What would she advise? Foolishly quit my job? Throw an engineering career down river?”), but without a coherent narrative to anchor them, such moments have no impact. The book reads as a stream-of-consciousness endeavor, rather than crafted prose.

In sum, this kaleidescope of color, sentence fragments and random thoughts is sure to overwhelm even the most persistent reader.