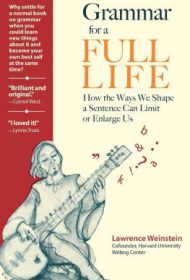 Grammar for a Full Life is a charming, accessible, and erudite exploration of the ways that our choices in syntax, sentence structure, and punctuation can affect our accumulation of psychological and spiritual benefits. Written by Lawrence Weinstein, an English professor and co-founder of Harvard’s Writing Center, it also stands as a thoughtful reflection on the personal impact of carefully considered language after a lifetime of scholarship on the subject.

As a jumping-off point, Weinstein revisits the now-discredited Sapir-Whorf hypothesis, which suggested that our worldviews are conditioned by the specific languages we speak. Noting the criticisms of that hypothesis, Weinstein turns his attention to a more specific question: Can we reshape our own worldviews by intentionally adopting different linguistic choices? Can we choose language to change ourselves? Weinstein believes the answer is yes.

For example, can a well-placed colon help us demand the attention we’ve earned? Will using the imperative help us gain needed assertiveness? Can strategically mixing active and passive voice help rekindle our sense of agency? Is there a connection between semicolons and generosity? Perhaps more profoundly, do existence verbs trick us into inaccurate beliefs about identity and time? And how can language effectively evolve, and how can it help us evolve in a rapidly changing time?

While there are moments when Weinstein’s connections seem a little tenuous (e.g., he uses a debatable interpretation of Emily Dickinson’s fondness for dashes to support his ideas), on the whole, the reader is left with the conviction that our language deeply matters — not only to others but in the very act of shaping ourselves.

Grammar for a Full Life holds surprising relevance for academics, such as students of psychology (particularly cognitive behavioral therapy) or philosophy of language, but it is written for a wider audience, and even those whose eyes glaze at recollections of English class will find thought-provoking inspiration within its pages.