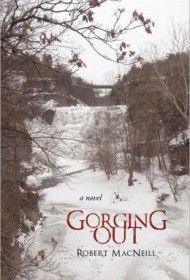 Early in Robert MacNeill’s Gorging Out, protagonist Roger Froehlich reflects that he’s just “a collection of everything [he’s] heard everyone else say.” This sentence comprises a synecdoche for the story, in which Froehlich alternately slips from acts of compassion to those vengeful and brutish. It’s as though the author were trying to tell readers, throughout this fast-paced mystery, that character is nothing but a grab bag of traits to be donned for specific occasions. No one, he implies, can be sure who he is until he has observed his reactions in a variety of stressful situations.

The catalyst for the events that show us what Froehlich is made of is the sudden disappearance of Froehlich’s cousin, Fritz Engler. Froehlich’s aunt has cancer, and she begs Froehlich to find Fritz so that she may reconcile with him before she dies.

Froehlich’s inquiries concerning Fritz lead him to Cornell, where he learns that Fritz was paying “lab assistants” to serve as prostitutes in order to gain data for a research project. Revolted by this, Froehlich nevertheless continues his search, during which he sleeps with two of the research assistants, pushes a suicidal woman over the brink, and beats one man involved in the experiment senseless. The only thing that seems to disturb Froehlich is his discovery that his cousin, whom he loathes, once admired him.

Gorging Out has the potential to be a solid entry into the ranks of the noir genre and often scores. Where it misses the mark is in its failure to consistently carry through the main character’s thoughtfulness as expressed in the opening pages. When Froehlich sums up the novel’s first victim as “a dumb broad,” for instance, his lack of reflection disappoints and short-changes the novel as a whole. While it’s difficult to portray an introspective anti-hero, MacNeill has demonstrated that this is well within his artistic powers; his promising novel would be stronger had he fully realized his capabilities.