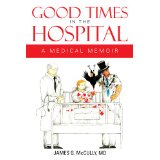 Dr. James G. McCully spent 40 years in health care. He trained at Duke University School of Medicine and the Mayo Clinic and practiced diagnostic radiology for 30 years. Good Times in the Hospital presents his marvelous recollections of and reflections on his career and conveys some informative lessons in this time of health care debate.

Tracing his career, the now-retired doctor treats us to some wonderful stories. “The Bread Mold Lady” tells of a patient of one of his professors who had combated a severe bone infection by stuffing moldy bread into the open wounds in her leg. The home remedy worked because the bread mold made a substance that killed dangerous bacteria. Only later did the scientific community discover that substance: penicillin. There is also a touching recollection about McCully’s former college roommate who developed terminal cancer many years later and found peace in his final hours only after a hospital visit from an elderly woman who had worked in his home.

McCully also entertains. He tells of one rural hospital where he worked and where he liked to eavesdrop on patients in the cafeteria. These small-town folk had their own names for their medical conditions, he says. Spinal meningitis was “smilin’ mighty Jesus,” and sickle cell anemia was “sick as hell anemia.”

Beyond making the reader think or laugh, his stories often convey a lesson, whether it’s on human nature or life as a doctor. In the last 40 or so pages of Good Times, McCully offers even more serious observations and opinions on topics such as home remedies and why they work, malpractice lawsuits, unnecessary testing, moderation and more.

McCully, a skilled writer and storyteller, writes that his goal with Good Times is to humanize doctors. He does that and more. This is an excellent book.