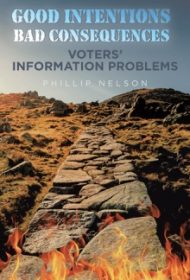 Economist Phillip Nelson, diving deeply into the rich research about why people vote the way they do, surfaces with a new and interesting, albeit challenging, model.

While many analyses of voting behavior focus on factors such as self-interest, Nelson introduces the concept of “naïve altruists” who, in their resolve to “do good,” too often ignore information about the important consequences of the public policies they advocate. For them, intentions are more important than outcomes. Just trying to do good is good enough.

Nelson also contends that naïve altruists are more characteristic of liberals, who tend to avoid accurate cost-benefit analyses of programs they advocate. Thus, they prefer to ignore studies that show, for example, the negative effects of raising the minimum wage. Or the anti-growth consequences of income redistribution.

Obviously, liberals will find much in this to dispute, although Nelson cites myriad social science studies to support his thesis. His conclusions may be arguable, but not easily dismissible. To be understood, this book requires thoughtful reading, with frequent pauses to reflect on the argumentation. This is not for readers looking for a skimmable polemic. Written in an academic style, it confronts laymen with the language of the soft sciences, such as “cohort effect” and “externalities.”

While its audience is decidedly niche, Good Intentions, Bad Consequences will appeal to academics, policy wonks, politicians and those more familiar with voting behavior research. Such readers will find it a valuable addition to literature devoted to understanding a topic vital to a successful democracy.