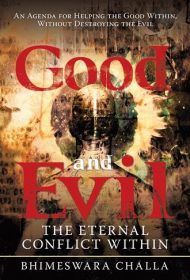 Good and Evil: The Eternal Conflict Within comprises author Bhimeswara Challa’s pensive engagement with a fundamental question: Why is it so hard to be good? And considering the apocalyptic pairing of climate crisis and a global pandemic, is it possible that the world is better off without us?

Good and Evil is an expansive tome, synthesizing moral philosophy, comparative religion, and literary criticism. Themes include the relationship between wealth and morality, the impact of technology on human values, and the connection between mortality and spirituality. It’s a broad survey of the human condition, a dismal analysis of our moral trajectory, and (the author hopes) an atlas outlining a new path forward.

Challa’s writing is dense with quotations from both classical and unconventional figures from literature and philosophy, as well as passages from numerous sacred texts. There are some unexpected cameos from the likes of libertarian icon Ayn Rand, controversial mystic Osho, and even the Unabomber.

Challa’s reliance on the words of others is both a strength and a weakness. It provides cross-cultural introspection regarding evil’s human origins but blunts the impact of Challa’s analysis. Too often paragraphs drag on seemingly just so Challa can highlight more of his favorite quotations.

Overall, the narrative is broader than it is deep; it hits a wide range of themes but provides few original insights. It seems pedestrian to point out, for example, that income equality and environmental degradation are pressing societal ills, or that money tends to corrupt otherwise good people.

Challa is not overly specific regarding what, precisely, we should do about these problems, but he’s devastatingly successful in conveying a sense of urgency. His book has pluses and minuses: It’s in equal measures impressively erudite and irritatingly bloviating. But it’s difficult to imagine a more convincing case that humanity is facing a demise brought about by its own moral decay and that the antidote involves each of us trying to do just a little bit better.