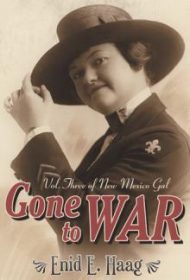 Gone to War is an historical novel set during WWI and tells the story of a young American nurse travelling to Europe to work on the front-line in war-torn France. While this is Enid E. Haag’s third novel about her main character, Emma Roeder, it works effectively as a standalone story.

Emma is a brave and resilient character, joining the first team of nurses sent to Europe and hoping, while she’s there, to connect with her fiancé, Wolfe, an American doctor involved in the war effort. The novel follows both Emma and Wolfe through various challenges and incidents that crop up during their work, including a period where Wolfe goes missing and Emma fears the worst.

The novel’s characters are likable, and the historical detail Haag has uncovered about nursing during the First World War is interesting.  Concern for Emma and Wolfe, as well as minor characters—the veterinarian, Juan, and Emma’s long-lost brother, Edmund—keeps the plot moving. The descriptions of shell-shock, amputations and disfigurements experienced by soldiers are not graphic but still effectively convey the world that Emma finds herself working within.

Although generally well-written, a large cast of supporting characters causes some confusion. One man is called both Karl and Kurt  and two nurses, Bev and Jackie, may only have been intended to be one character. Haag relies on dialogue to convey historical information and, as a result, her characters’ conversations are too often stilted and unnatural. A storyline is introduced suggesting that Emma’s fiancé may be falling for another nurse, Maddie, but nothing comes of it, and at other times the main action is so reliant on coincidence (for example, Emma and Wolfe easily connecting in Paris as soon as she arrives) that the story loses credibility.

That said, the novel flows at a steady pace and the period is well evoked through a sympathetic, gentle character in Haag’s nurse, Emma.