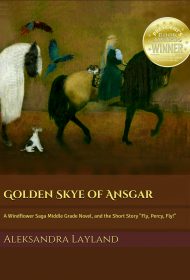 Golden Skye of Ansgar is a middle-grade novel and essay by Aleksandra Layland, author of the Windflower Saga Collection. The saga features the fictional Ansgar royal family of Kimbria and the queen’s warhorse Golden Skye, a legend throughout the kingdom because she displays the rare golden coat of the horse depicted on the Ansgar shield.

Set in a time resembling the medieval era, the novel spans the last four years of King Leofric and Queen Keridwen’s reign. As it begins, the queen receives Skye as a gift. Once Skye joins the herd of horses at the Royal Palace, she mingles easily with the others and draws amorous attention from the stallion, Silver Cloud.

The story doesn’t really have an overarching conflict. Rather, each chapter centers on an event. There are birthday parties; horse exhibitions; madcap adventures when parrots fly away from their handlers; voyages the royal family makes to their homeland. Skye gives birth to twin foals to the delight of all, and vandals try to steal the foals. The book ends with the royal family leaving the throne.

Short chapters and crisp prose keep the flow brisk and contain vivid illustrations of the characters and animals. The focus on adventure rather than character development befits the genre, and the characters’ words and deeds exemplify themes such as companionship, responsibility, and duty. If some descriptions (as in: “[Bogumil] was the third oldest son and the fifth child of the King and Queen”) seem too complex for young readers, they’re largely balanced by Layland’s approachable tone.

While the essay lacks an identifiable narrator and is disjointed in its approach, the Ansgar story’s whimsical world and likable characters eclipse any flaws and provide an entertaining read.