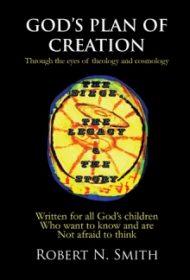 In this metaphysical exploration of our “divine destiny” to “become one with the One God,” retired Navy veteran Robert N. Smith offers wisdom gleaned from decades of religious study in order to provide readers with insights for spiritual transformation.

Mixing scholarship with inspiration drawn from Smith’s own mystical dreams and visions, God’s Plan of Creation is a series of more than 300 short reflections on the nature, beauty, and power of the Divine. The book is divided into two parts: “The Seige,” which deals primarily with creation, angels, devils, spiritual warfare, and prophecy, and “The Legacy,” which focuses on how “we are created in God’s image and how we can learn to communicate with our loving Father in heaven.” Throughout, the book uses biblical and non-biblical sources to help readers “progress [in their lives] spiritually, mentally, and physically.”

Smith is an earnest seeker who shines most brightly when waxing philosophical on such topics as the relationship between science and religion and what he calls “The Five Levels of Consciousness,” which explores parapsychological theories on our thoughts and the mind. While many of his views challenge deeply held beliefs of organized religion—such as the mysterious link he sees between God the Father, Jesus, and what he calls Prince Michael (seemingly what many believe to be the archangel Michael)—his speculation is interesting nonetheless.

Smith’s writings jump from topic to topic, often without proper literary transitions, and some will be deterred by the loose sense of organization. But the author’s reflections are often intriguing, especially his interpretation of the war between heaven and earth and the rise and fall of devils and saviors.

Those who prefer traditional orthodoxy will likely find Smith’s ideas offputting. But readers who appreciated A Course in Miracles or the diary of Polish nun, St. Faustina Kowalska, may find Smith’s book of interest.