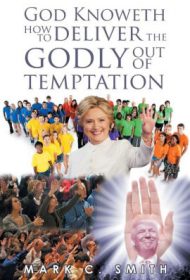 In this volume, Mark C. Smith pleads God’s case against women in authority by focusing on the 2016 presidential election as proof of his position based on the Bible.

This author aspires “to let the world know that God’s word will stand true regarding the 2016 presidential election.” Writing between August 3, 2016 and November 9, 2016, Smith asserts that he and President Trump have two things in common: both are novices (he as an author, President Trump as a politician) and both are “chosen by God” for their respective roles in America’s story. The author uses Scripture to repeatedly state that women should never have power and authority over men, whether in government (as president in the White House), in religion (as pastor/preacher in a church), or in the family (as ruler over her husband)—a position likely to alienate many readers.

Universal truths are more easily understood when specific cases are examined, and Smith takes this position in presenting his work. Repetition, which Smith admits to lavishly using, is also an accepted mode of teaching. However, in print, his use of repetition—many times verbatim—becomes wearisome.

Of more concern is the repeated misstatement of Scripture. For example, in Genesis 2:16 (KJV), God spoke to Adam regarding the tree of the knowledge of good and evil: “… thou shalt not eat of it.” When conversing with the serpent, Eve added to what God had declared: “Ye shall not eat of it, neither shall ye touch it, lest ye die” (Gen. 3:3, emphasis is reviewer’s). Smith attributes Eve’s additional words to God and repeats this mistaken assertion throughout. Such moments greatly undermine his authority. Also, on at least ten occasions, he neglects to choose between two words, leaving both and causing confusion.

The author’s passion for the topic and commitment to his call are obvious. His execution is lacking, however, making this an unconvincing and unsatisfying read.