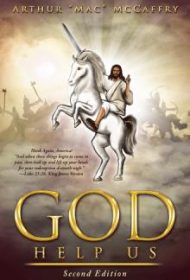 Mike Cutler is a 62-year old war veteran living in Indiana. He has overcome much in his life: surviving a horrific experience in Vietnam and the death of his beloved wife. But most concerning is his long separation from God after a leader in his church molests a neighbor’s daughter and the church covers up the crime. But Cutler’s empty existence changes when he’s visited by an angel (called “Friend”) sent by God to bring meaning and joy back into his life.

Cutler realizes that he needs to prepare himself—and all of humankind—for the Second Coming, when “the sky will open, a trumpet will sound, and the Lord with a host of angels will appear in the heavens!” Armed with his newfound faith, he prepares to do God’s will and embarks on a series of deadly missions that will force him to look into the abyss of Hell as well as gaze at the glory of Heaven.

This is an ambitious novel, unfortunately laid low by myriad flaws. Most importantly, the book is burdened by grammatical errors. Readers are constantly distracted by the inundation of error-filled sentences such as “I can see it in their eye’s sir.” Such errors aside, structural pitfalls abound. Character description and overall description are almost nonexistent, and aside from Cutler, character development is weak. Additionally, the author often “tells” rather than “shows” readers the proceedings, leading to an emotionally detached reading experience.

The mission, according to the author, is “to make people aware the rapture of the Church is near; before a bugle sounds high in the heavens with our Lord Jesus appearing…” While the message is certainly there, writing and editing issues decrease the novel’s ultimate power.