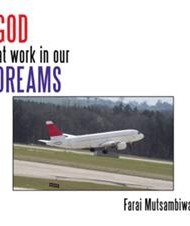 From the dawn of time, many have believed that dreams contain a certain prophetic power. From Australian aborigines to Egyptian pharaohs to Hopi Native American shamans, true vision didn’t occur during the waking hours of day, but during the seemingly silent darkness of sleep. Nowhere is this more apparent than in the Judeo-Christian tradition where God communicated directly with his chosen people not only through angels and prophets, but through dreams as well. Biblical heroes Jacob, David, Solomon, and Daniel all had dreams that foretold of events that would change the course history.

Farai Mutsambiwa’s nicely illustrated book God at Work in Our Dreams, explores this age-old relationship between the Almighty and the symbolic movies that play in our minds while we’re sleeping. In ten short chapters, Mutsambiwa illuminates many prophetic stories in the Bible and explores how dreams can serve as a source of guidance, hope, and prosperity. He also discusses how nightmares may serve as an entrance to prayer. Citing one of his own dreams in which he was threatened by a madman, Mutsambiwa relates how upon waking he began praying to God for protection. The next day, he fell so hard on the ice in his driveway that he should have broken bones. But he was unscathed. For the author, the dream and the prayers that followed saved him from bodily harm.

Mutsambiwa is exuberant about his material and earnest in his devotion. He has an artist’s eye, and the photographs throughout lend an inspirational quality to his work. There are, however, a number of grammatical errors in the text and the prose, while poetic, could use polishing. These caveats aside, Mutsambiwa’s book is an enjoyable read and may appeal to church groups looking to deepen their faith by exploring the mysterious world of dreams past and present.