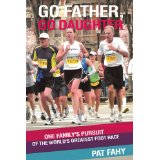 In 2009, Pat Fahy and his then-31-year-old daughter, Emmie Cardella, crossed the finish line of the Boston Marathon within a second of each other. The road to Boston was a long one, starting with the two deciding to run together in 2005. Fahy was a national Master’s track and field champion with no desire to run long distances. When Emmie signed up to run the P.F. Chang Marathon in Phoenix, however, Fahy started running with her for some father-daughter bonding time. Before long, he caught the running bug, and together the two decided they would not only qualify for the Boston Marathon but run and finish it together.

Over the next four years, Emmie took time off from serious training to have a child, but they both continued to run. Fahy qualified for and ran his first Boston Marathon without Emmie in 2007. While he didn’t fare as well in that race as he would have liked, when he and Emmie finally ran it together, the experience left them both euphoric.

Fahy, a semi-retired aerospace worker and special education aide, is an avid sports fan who is detail-oriented. In the long-distance running world, some take the sport seriously and train to win, recording the minutiae of every run, while more casual runners just want to finish. Fahy is definitely among the former. He includes every detail here, from sprint times to wind direction to whether he wore short-sleeve or long-sleeve shirts on any given race day. For those not equally as enthusiastic about the sport, the level of detail becomes cumbersome.

While little exists in the way of suspense here, since we know from the start that Fahy and his daughter achieved their goal, the story is motivational and will hold appeal for serious runners interested in the finer points of the sport or insight into the Boston Marathon. Others are likely to find themselves bogged down in the details.