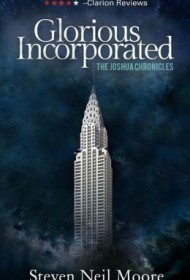 Mergers and acquisitions take on a whole new meaning in Steven Neil Moore’s complexly layered debut novel. Glorious Incorporated: The Joshua Chronicles is an unusual and intriguing thriller, the first in a planned series, set in a high-tech future where mega corporations compete for control not only of the markets, but also of mankind.

The book blends futuristic science fiction scenarios remarkably well with old-fashioned moral messages. In a hyper-modern New York City, philanthropic company Jonah International is keen to recruit sharp young Josh Arden to help it prevail over its ruthless corporate rival, Alastar-McGlocklin. Josh doesn’t know that he has been chosen to shift the balance in an ongoing battle between the forces of good and evil that extend far beyond Wall Street.

Moore’s story includes elements reminiscent of Mission Impossible (covert drone surveillance and a sentient elevator, for instance) and also The DaVinci Code (a race to collect religious relics with a mysterious connection). Clear and detailed when writing about futuristic technology, Moore is less explicit when describing the artifacts at the heart of the battle. While he is apparently saving certain revelations for later volumes, some might find that frustrating.

Still the story turns on the choices of its main character, and Josh is a humble hero with a compelling background story and a realistically drawn everyday life, a hero that readers can both admire and understand. (Not all of the characters though, are as nuanced as Josh. Alastar-McGlocklin’s leader Pymm is the stereotypical devil, with his red, glowing eyes and soul-binding contracts. By comparison, the clichéd portrait of evil is somewhat disappointing.)

Even though Moore leaves many questions unresolved for now, he wraps up a key mission in The Joshua Chronicles, providing both a satisfying ending and the promise of more to come.