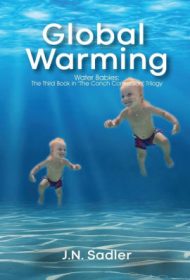 The final volume of J.N. Sadler’s Conch Conversion trilogy (after The Darlington Rogue) concludes the speculative science fiction narrative about a group of scientists’ attempt to create a post-human race capable of breathing, and living, underwater.

Pisces—the genetically altered baby from The Darlington Rogue who can breathe underwater and who is humankind’s last hope to survive when global warming covers most of the land with water—is now an adult and recently married to Jean. His betrothed is pregnant and, for their honeymoon, they plan to travel back to the wild branch of the Darlington River, to the secret scientific compound where Pisces was born.

Jean is clueless about her husband’s genetic makeup and has no idea that her child—or children, since she’s big enough to be carrying twins—are post-human. Their trip is fraught with danger: Sharks that have been consuming the altered flesh of failed evolutionary experiments near the compound are evolving into nightmarishly adaptable creatures, and someone is murdering those investigating the covert, and illegal, experiments.

The themes explored throughout the story—the impending ecological disaster caused by global warming that could wipe out humankind, the reversal of Darwin’s theory of evolution, etc.—make this a fascinating speculative premise. Unfortunately, the novel suffers the same impediment as the former installment: Just as the story is reaching its climactic ending, the narrative speeds up unnecessarily, jarringly jumping forward months and years and losing focus of critical storytelling elements like tension, immersion, and character depth. This negatively impacts the final thematic punch and gives it a rushed and unfinished feel.

Also, numerous tantalizing plot threads are left dangling, such as the continuing evolution of the genetically modified sharks. The author may want to consider continuing this saga to tie up loose ends.

In all, this story presents a great premise, but imperfect execution makes for an uneven reading experience and a story that never quite fulfills its potential.