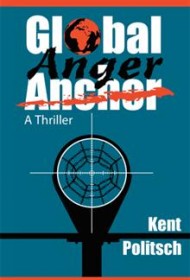 With his first effort in the thriller genre, Global Anger author Kent Politsch strives for the international intrigue of Stieg Larsson (The Girl with the Dragon Tattoo) by way of a conspiracy-laced plot suggestive of Dan Brown (The Da Vinci Code) – with mixed results.

Politsch whisks readers around the globe, from the streets of Washington, D.C., to the deserts of Libya, weaving a complicated tale involving political power struggles, international drug rings, government cover-ups and even inner-city youth basketball. Sniper schemes and assassination attempts punctuate tense, suspenseful scenes portraying dealmakers at work in places ranging from the back alleys of Baltimore to the glitzy casinos of Las Vegas.

These wildly divergent scenes, however, follow one another like the acts of a play with no intermission, and the rapid, repeated switching disengages the reader. Just when a reader becomes interested in why a woman in the Grand Caymans has placed a listening device in the wallet of a rich businessman, Politsch closes the curtain. When he opens it again, the set has changed to the U.S. Secretary of Agriculture’s office, with no explanation.

Attempts to clarify the tenuous connections among the various actors and their missions are rarely satisfying, perhaps because Politsch sketches most characters lightly, so their motives are unclear. He does provide authentic details for the action – the kind of weapon appropriate for a roof-top sniper, for instance – but this realistic context might not be enough to sustain interest.

For the determined reader, Politsch provides a summary justification of events very near the end, but he leaves enough questions open that a sequel seems certain.