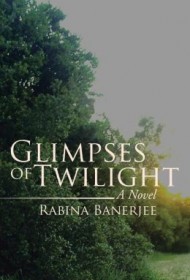 This slender novel moves between India and California as a young Bengali woman tries to reconcile her former life as a college student in the U.S. and current life in her home country, where she enters into an arranged marriage.

The story begins as protagonist Loyosha returns to the palace, “Brikhabhavan,” she once shared with her husband. She expects to say goodbye to an elderly woman who is on her deathbed and who once held the secrets to Brikhabhavan. The chauffer-driven ride soon triggers memories, and the story shifts to her younger days in California at Covington College, where she befriended a handsome Egyptian man, Ibrahim, and found herself falling in love. But when her college days ended, she began a new way of life.

Now married, business takes her and her husband back to the U.S., where an encounter leaves her dazed and uneasy as old feelings rise. But when tragedy strikes, not once, but several times, her life again changes dramatically.

Banerjee sets a moody tone, appropriate for a tale told in the tradition of an “eighteenth-century English Gothic suspense novel in an Indian background” (as described on the back cover). Likewise, she creates a protagonist appropriately hopeful in her youth but realistic in her future. Her knowledge of the Bengali culture adds nice detail and color.

Unfortunately, errors and redundancies get in the way of the storytelling, including: missing or misplaced commas and hyphens; words, such as “aunt,” that should begin with a capital letter but do not; and misused words, such as a road that is “gravel infested.” While unecessary information is repeated, such as the affection Loyosha feels for Ibrahim, scenes that would give the story its most drama never fully play out.

Fans of gothic novels such as Daphne DuMaurier’s, Rebecca, might enjoy this story, but many are likely to find themselves frustrated by the missteps and choose to stop reading before the story’s end.