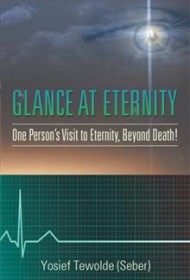 Near-death experiences have long fascinated readers. Glance At Eternity: One Person’s Visit to Eternity, Beyond Death! aims to capitalize on that phenomenon.

Author Yosief Tewolde (Seber), an Eritrean who emigrated to England, was severely injured in an accident that’s vaguely described here as involving a train. As a result, he lost a leg, was blinded in one eye, and suffered brain damage. While he may have been near death, he doesn’t remember any details of that time, since he was in a coma in intensive care.

Tewolde, nonetheless, claims to have visited eternity, “although I have no memories to back this up with.” Given the circumstances, he is unable to elaborate. Most of the book instead describes his waking up in the hospital and transferring to a second one, working to regain his memory, being fitted for a prosthetic and learning to walk and return to daily life with the help of an occupational therapist. There are also the tough moments when he sees someone he should know, but can’t recall who they are.

The writing here is full of discursive loops and distracted side notes, which is not surprising given the author’s injuries. Still, his personality comes through in small, funny observations, as when he writes: “I was told that I had been into [sic] a lengthy coma period…Mine was said to be protracted and medically extended, as if natural comatose was not enough.”

Tewolde is joyous about being alive, and readers will find this an uplifting message. Unfortunately, his writing is often convoluted and lacking the emotional pull of more accomplished memoirs. Many readers may feel disappointed, having been set up to expect a detailed account of a near-death experience.

Glance At Eternity has some unique strengths, but ultimately they’re undermined by its misleading packaging and a narrative that requires further polish.