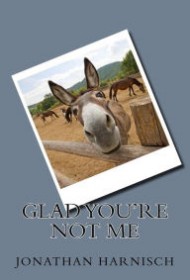 With Glad You’re Not Me, essayist and novelist Jonathan Harnisch offers a short entry in the ongoing, semi-autobiographical work that has characterized his writing. The author is open about suffering from several mental disorders, including schizophrenia and Tourette’s syndrome, and his raw experience enhances and informs his work.

Here, he seems to appear as a version of himself, which he calls “Harnisch the writer”—although he also emerges as a different sort of enigma in the personality he dubs, “The Mentally Ill Artist.” This rather funny, self-admitted narcissist presents what seems to be a distorted mirror image to a fictionalized version of Harnisch rendered in real life-writer Myriam Gurba’s chapbook Wish You Were Me. Harnisch refers to Gurba’s book repeatedly, and notes that his book is his direct response to the chapbook he calls “…pioneering with all its weird and unexplored thought patterns.”

In this book, Harnisch spills out his thoughts in 21 snapshots of varying lengths and subjects. Sometimes his writing can be quite poetic. In explaining why he writes, Harnisch says, “My goal: to attain an ounce, a moment of seemingly impossible peace of mind, through complete honesty and self-love, by any means necessary.” Sometimes he muses on his own character as a human being. Other passages are grotesque depictions of deviant sexuality often involving transsexuals. And sometimes, he’s letting us in on his ironic sense of humor, if subtly. “Envision a blend of a mentally ill mind with unsurpassed resilience and fiery intellect and your result would be the brilliant me,” Harnisch writes.

These passages vary in quality: Text messages between Harnisch and Gurba are rather pedestrian compared to the author’s thoughts on time travel or the creative spirit, but there’s no denying his unique voice. Is he paying homage to Gurba for her portrayal of him in her chapbook? Probably. Is he also playing with his readers and their implied perception of his art and his illness? Definitely.

Whatever the intent, his talent is undeniable, even if this may be a bit too pointed of an entry into his byzantine mindset. New readers might be better served starting with his larger saga, Jonathan Harnisch: An Alibiography.