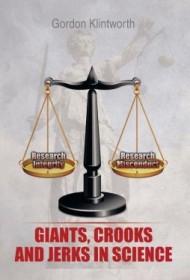 Giants, Crooks and Jerks in Science is a measured analysis of the malfeasance perpetrated by researchers in a variety of scientific fields. While the author, Gordon Klintworth, is careful to stress that most scientists approach their fields of study with integrity, he nevertheless points out that those who do participate in misconduct shake the public’s belief in scientific studies as a whole.

It is this erosion of belief in the dependability of science that the author, himself a professor of pathology and ophthalmology, seeks to combat with his eye-opening, 700-page compendium of scientific wrongdoing. Klintworth not only thoroughly discusses instances of misconduct, from falsified and fabricated data to the misuse of government funds and the unethical treatment of human subjects, but also explains why these instances occur and suggests corrective measures.

Today’s scientists, Klintworth explains, operate in a pressure cooker of competing interests. “Dwindling…research funds, and an excessive emphasis on productivity by universities and research institutions in promotion, salary and tenure decisions,” are all contributing factors to research misconduct. In addition, the prospect of enormous profits in the arena of pharmaceuticals and cell line patenting causes some scientists to cross ethical lines.

In order to rectify the scientific slide toward the dark side, Klintworth suggests a number of steps, including classes in ethics for graduate students and better oversight by project leaders. He also describes the history of government agencies that have been put in place to monitor scientific projects, and the self-governing actions taken by the scientific community.

This is important territory, and Klintworth provides an illuminating view of science that isn’t often examined. The book’s main drawback is its need for copyediting; it is riddled typos, punctuation, and verb agreement errors that present obstacles to the reading experience. Consequently, the text would need careful proofreading in order to garner the audience it deserves. With such revision, however, Klintworth’s monograph would make a wonderful handbook for those interested in the ethics of science.