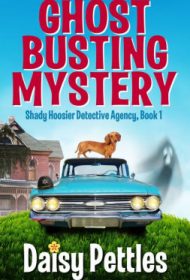 Filled to the brim with farce and local color, this first outing in Daisy Pettles’ Shady Hoosier Detective series is a good-humored romp that is sometimes laugh-out-loud amusing.

When farmer Dode Schneider of rural Knobby Waters, Indiana, claims that he’s seen ghosts (or could it be aliens?) that he’s sure are “up to no good” around the tumbledown Wyatt mansion, the sheriff lets him know, “We police the living, not the dead.” So, it falls to 67-year-old Ruby Jane Waskom and 71-year-old Lavinia “Veenie” Goens, two operatives of The Harry Shades Detective Agency, to take on a case that entails not just ghost busting but a hunt for buried treasure.

Ruby Jane — a woman endowed with a bad knee, a sharp eye for detail, a talent for quoting local yokels’ quips, and a winningly wry sense of humor — recounts the action. Tooling around in a smoke-belching, turquoise ’66 Chevy Impala, Ruby Jane and Veenie gamely make their way to the reputedly haunted mansion, where they find a century-old, female skeleton sitting in a rocking chair.

While medical examiner April Trueblood — notable for her “floozified” fashion sense — works to pinpoint the cause of death, the sleuths glean information from locals around town. In a séance, they also seek information directly from the ghost of the dead woman, whom they believe to have been a young wife “betrayed” and “knocked up” by her husband Jedidiah Wyatt back in 1919. They also search for Confederate gold coins Wyatt reputedly buried before deserting his spouse.

Occasionally the humor here runs to the suggestive, as when a man’s open robe reveals his thong and when Veenie’s avid sexual appetite is remarked upon, but it’s never graphic, and a sense of fun prevails. Meanwhile, lively dialogue and action propel this mystery headlong to a satisfying conclusion that bodes well for the continuing series.

Readers who love mysteries with a light-hearted bent are sure to enjoy this journey with Ruby Jane and Veenie.