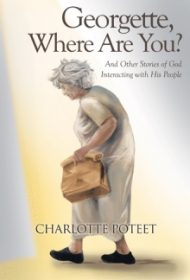 Georgette, Where Are You? is a collection of 60-plus essays and poems demonstrating how different Christian believers interact with God. The author wrote many of the entries herself and compiled others from family and friends.

The poems have religious themes, and each story demonstrates an aspect of the writer’s faith journey. For instance, some stories, such as one about how a woman’s suffering is replaced by peace, show an answer to prayer. In others, the writers’ prayers aren’t answered the way they had requested, leaving them wrestling with what lesson they’ve learned. Since each story is true, the conclusions are not always neat and tidy.

Several of the stories are especially riveting, such as the title story about Georgette. In this piece, the author has trouble accepting a particularly annoying woman, yet learns a life lesson that will be relatable to many readers. In another, the writer has an encounter with a rude woman that leaves her scarred. This writer never understands why the woman was cruel but chooses to see a greater good out of the situation despite her poor treatment. Other stories are touching, such as the entry about a two-year-old healed after an accidental overdose and the several-part narrative about the author befriending a lonely neighbor.

While many stories are engaging, about half are quite simple and don’t deliver the storytelling finesse or “aha” ending that would keep readers engaged, such as one story in which the writer gives thanks for a rotten blueberry that drops from her hand, leaving her with a handful of only good blueberries, and another that expresses gratitude for a gift of store-bought clothing.

The collection’s unevenness isn’t likely to deter readers, however, as they can easily skip through the book, picking and choosing the essays most meaningful to them personally and skimming the rest. In this way, Christian readers will find enjoyable stories here.