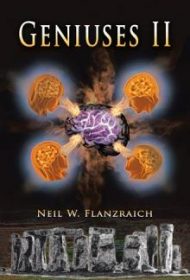 The protagonist who fuels Neil W. Flanzraich’s second entry in the Geniuses series is a member of an elite group of superhumans known as Geniuses, a breed of individuals with IQs well over 1,000 and an impressive set of powers to match.

Roger Reynolds can tap into his exceptional mental abilities to control the thought processes of others. He can also manipulate the physical world around him, telepathically communicate across vast distances, and extend his life expectancy (Reynolds is more than 170 years old). He’s the latest in a long family line of Geniuses, a pedigree that stretches back to the Britain of King Arthur and Merlin.

Reynolds’ latest conflict with the forces of evil comes as he must battle a purely malevolent intellectual force to save his wife and daughter in a conflict waged across the world. It’s a struggle spelled out in an ancient prophecy first delivered by Merlin to Reynolds’ ancestors more than 1,500 years ago.

Flanzraich does a skillful job of rapidly and effectively introducing new readers to his imagined world. The author immediately jumps into faced-paced action sequences, as Roger faces mortal danger in the opening pages, and fans of fantasy and history will find much to enjoy in a narrative style that’s rich in precision and detail.

However, Flanzraich sometimes takes this quality too far, as some sequences suffer from a stilted, technical feel (“Genius multifactorial predictive abilities were not only useful in dice or weather prediction. This ability permitted most Geniuses to make better informed decisions in every aspect of their lives”). Readers looking for a straightforward adventure may be dissuaded by such wooden stretches.

Still, Flanzraich imbues his imagined race of superhumans with an impressive level of expertise and detail—a touch that gives the story and characters an admirable degree of believability that should appeal to many readers.