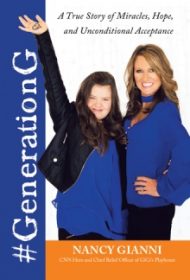 Nancy Gianni had her life all mapped out. Then it threw a curve ball her way. In #GenerationG, the author describes how the birth of her third child altered the course of her life in ways nobody could have anticipated.

Gianni writes that when GiGi was born with Down syndrome and a heart defect, she had to balance care for her two older kids with GiGi’s needs. After considering her situation, and that of other parents of children with Down syndrome, she had a vision: Create a place where anyone with special needs and their families could come to play, learn, and shine, at no cost. The space she developed is now a string of locations under the GiGi’s Playhouse brand, for which Gianni serves as CEO and “chief belief officer.”

Gianni confides in her audience as if chatting over a glass of wine, anticipating readers’ questions and answering them as she zips through her story. Having a special needs child in a family already spread thin with care responsibilities (Gianni’s brother was diagnosed with schizophrenia and her sister-in-law had cancer) caused her marriage to suffer. Meanwhile, her older children got an inadvertent education in bullying (classmates used “GiGi” and “GiGi’s Playhouse” as slurs in the same way that kids might call someone “retarded”); if it was painful, it also made them stronger.

GiGi herself stays somewhat in the story’s background until about three-quarters of the way through, where she’s revealed to be both an exceptional and typical teenager. She speaks to enormous crowds to fight the stigma against people with Down syndrome—and wheedles her mom for permission to watch adult TV shows, just as any other child might.

#GenerationG is really the biography of a nonprofit with a family story at its heart. Readers will be entertained as events unfold, but they can also learn how to bring a dream into being in this inspiring, empowering book.