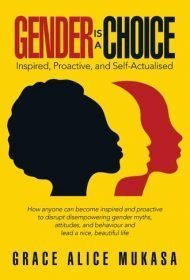 In Gender is a Choice, Grace Alice Mukasa, a native of Uganda passionate about gender injustice and women’s rights, aims to inspire readers to change their attitudes.

Mukasa witnessed firsthand systematic discrimination against girls and women in Uganda. Now an international development director with a master’s degree in gender and development, she encourages others to be “disrupters” of the biased cultural norms to help transform the lives of the most vulnerable.

Later chapters offer stories of women hurt when denied rights. For example, young teen Modesta was forced to marry an older man and developed serious health issues after five quick pregnancies. Denied birth control because her husband didn’t approve of it, she became pregnant once more and died at age 20 during childbirth.

Each chapter concludes with specific calls to action. Readers are encouraged to actively participate by thinking about ways specific socialization has affected their own lives and then are asked to “[s]elect and outline your personal path to contribute to gender equality.”

This is a thought-provoking work, but it also presents some reading obstacles. Black-and-white cartoon illustrations are scattered throughout, but the tiny dialogue within some of them is difficult to read. There also are typos (twice Barack Obama is spelled Barrack). And while informative details abound, the heavy-handed use of others’ quotes dropped into the main narrative disrupt the author’s own thoughts, resulting in a less-than-smooth read.

Revisions to address the issues above would make this a more appealing release. Nonetheless, readers will find interesting information throughout.