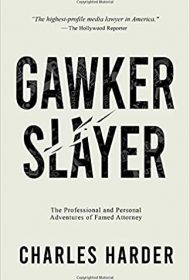 Near the conclusion of GAWKER SLAYER, author Charles Harder reveals that “I always wanted to write a book like this one.” The result is a celebration of his legal work on behalf of A-list celebrities, including the former president and Melania Trump, plus chapters about his early life, personal heroes and plans for changing the world.

The legal chapters are fascinating, particularly those devoted to Gawker. In 2012, the website—Harder calls it “the world’s biggest cyberbully”—posted a video of wrestler Hulk Hogan having sex with a woman other than his wife. The video had been recorded five years earlier by the woman’s husband, Bubba the Love Sponge Clem. Hogan hired Harder to sue Gawker for invasion of privacy, and “We won big,” Harder writes. “The jury’s $140 million verdict in March 2016 put Gawker where it belonged: out of business.” Some, however, questioned the verdict’s potential impact on the First Amendment, one journalist dubbing Harder “the media’s Darth Vader.”

Other clients include Bill Cosby victim Kathrine McKee and Halle Berry, who wanted to rid herself of the paparazzi who stalked her and her daughter. Harder details a star-studded strategy meeting for Berry’s complaint at the home of Jennifer Garner and Ben Affleck.

The author rails against journalists and their “fake news” and recounts the defamation and libel cases he’s filed for highly placed clients, including Melania Trump, for whom he won $2.9 million and an apology from the Daily Mail.

Harder intersperses stories of his life and feelings about current affairs between accounts of legal cases. These are mostly mundane tales, particularly compared to the legal stories, and interrupt the narrative flow. His personal chapters are largely devoid of introspection, and it’s unclear if readers will be interested in his opinions on everything from the economy to bullying and slavery.

Harder’s personal chapters can easily be skipped. Readers who love stories about celebrities and the Trumps, however, should enjoy the author’s professional adventures.