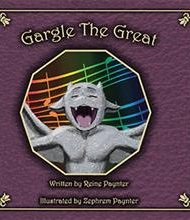 The book starts out with some fun couplets that establish the story’s tension: “There once were gargoyles that lived in those woods,/ they worked on their stances, as good gargoyles should./[…] “But one was quite different – no sitter at heart./ He longed to be famous! He had dreams of art.”

We soon learn that the self-named “Gargle the Great” has aspirations to “please” nearby villagers by singing at night. Unfortunately, Gargle’s untutored singing is so far from pleasing that it robs villagers of their sleep and rouses a “mob” to frighten him “fiercely with pitchfork and flame!”

In scenes dramatically depicted by illustrator Zephrem Paynter, Gargle flees the mob to seal himself into a cave. Singing to cheer himself up, he finds that echoes of his voice allow him to refine his skills. When passing members of a circus hear “melodies of great beauty” coming from his cave, they urge him to perform in their show, where his improved singing moves to tears those who once cruelly banished him.

While presenting a solid plot, this book’s rhyme scheme lacks some polish. Sometimes, it’s necessary to re-read couplets in order to find the rhythm, as in these lines that work by awkwardly placing emphasis on the second syllable of “Gargle” and the word “be”: “But why were they angry? Gargle did not know./ This hurt him quite badly, to be hated so.” And while the author might see the name “Gargle” as cutely echoing “gargoyle,” unwanted associations with mouthwash and sore throats may come to mind for many. “Gargoyle the Great” would have made a more marketable title.

Nonetheless, the illustrations are professional and engaging, and the message remains strong. Ultimately, Gargle does achieve fame, but more importantly, he learns the value of perseverance and the power of music to inspire. That lesson makes this a worthy book to read to young children.