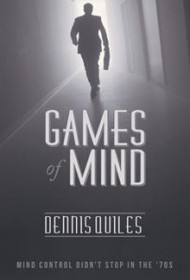 The story revolves around private investigator Jack Steele, a former Naval intelligence officer who travels to Nome, Alaska, at the request of his aunt to find out why his once lively and outgoing uncle has become soulless. Steele’s Uncle Jimmy goes to work every day, comes home every night, but in the tradition of Invasion of the Body Snatchers, he seems to have become somebody else who only looks like him.

In fact, Steele discovers that many of Nome’s citizens have either gone missing, committed suicide or, like his uncle, lost the human touch. The common denominator between these strange events is the Lindberg Research Corporation, a fortified science research facility outside of town, which controls or influences most of Nome’s citizenry down to its noncommittal sheriff.

Quiles’ military expertise resonates throughout the book, giving Games of Mind’s technical passages an air of authority and authenticity. The author knows his way around security tactics and military grade weaponry. However, to his detriment, the many military acronyms and titles interrupt the story’s flow, as does the way he switches from Jack Steele’s first-person point of view to third-person narrative randomly within a chapter and sometimes in alternating chapters.

Games of Mind has a plot so Machiavellian that LRC’s medical practices are not for the squeamish. Those with the stomach and a love for suspense, however, will find this Frankenstein meets James Bond thriller intriguing, despite its technical issues.