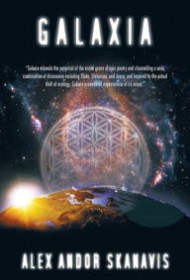 This multi-disciplinary work combines ecology, science fiction, and poetic verse in a sophisticated presentation of survival after a nuclear war. The book begins with a quotation from Isaac Asimov’s Foundation and Earth explaining that “Galaxia” means a unification of galaxies so that outside invaders from other parts of the universe cannot dominate because of weakness through division.

Led by Kreon, a plant-medicine enthusiast, a tribe of Earth’s last survivors explores the plant life rising after war nearly destroys the planet. One day Kreon finds a glowing mushroom near a fallen tree. The talking mushroom says to eat it, which he does. The tribe discovers other assorted colorful mushrooms – some good for sustenance, some with healing elements, and some containing hallucinogenic properties.

Wondering how mushrooms could flourish when other plants didn’t, he learns from the fungi that spores, rather than seeds, propagate the species, allowing cross-species fertilization. Aided by the council of glowing mushrooms, Kreon studies the various properties of the plants, and along with others, attempts to spread the spores over the war-torn lands to start life anew.

Divided into 32 chapters and three sections, “Myco-Genesis,” “Myco-Exodus,” and “Myco-Revelations,” Galaxia tells its scientific story through a relevant quotation starting each chapter followed by three or more 14-line stanzas of rhyming couplets. Eight pieces of black-and-white artwork also illustrate the tale. The scholarly nature of the work, its creative rhymes, and the beauty of the language (“Floral – infused trellises burst replete – / Nervous Systems form underground – discreet – ”) combine to create a notable read.

Nonetheless, the unique qualities of this work should delight its specialized readership: those who enjoy science fiction in poetic form.