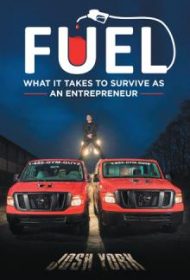 In FUEL, Josh York shares his entrepreneurial journey to create and franchise his business, GYMGUYZ. His business model focuses on taking gym equipment and trainers to customers where they are, rather than creating a fixed workout space. York is also finalizing his first international franchise (Canada).

York is a fan of acronyms, using them to motivate his GYMGUYZ staff and franchisees, and he also incorporates them into FUEL to inspire other entrepreneurs. One of his favorite acronyms for his franchisees, for example, is FUEL, which stands for: Fun (making exercise “something to look forward to”); Unity (he wants all his franchises to connect with one another); Earnings (which covers his belief that, if you “chase the vision,” then “money will follow”) and Leadership.

He spends the first fourth of the book sharing his pre-GYMGUYZ years as he searched for the right focus for his life. He didn’t like school and didn’t know what career he wanted. He didn’t come from a wealthy family and didn’t have much start-up cash. However, after hitting on his idea, he created a positive attitude and made it happen.

The author offers anecdotes to illustrate his struggles, along with advice on how to sidestep mistakes he experienced (although he believes mistakes can be a wonderful learning tool). When interviewing job candidates, for example, he notes that he often asks how they would respond if they were in a restaurant with executives who didn’t receive the right order. Their responses, York believes, illuminate their thought processes.

Unfortunately, the book tends to veer into self-promotion. (“As I write this, GYMGUYZ is still growing. Within five years, we’ll have hundreds and hundreds of franchises…”) Additionally, rather than a carefully crafted presentation, it reads more like a free-wheeling conversation.

FUEL is not an entrepreneurial blueprint; rather, it’s the story of York and his business, one peppered with insights from a highly driven entrepreneur. It should interest those seeking inspiration from another person’s success story.