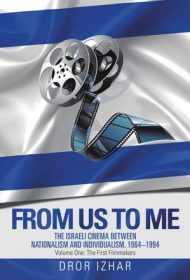 In From Us to Me, historian Dror Izhar offers an analysis of the early titans of Israeli cinema.

The first of a two-volume series, this work traces a cinematic path from the collective to the individual. Much of Izhar’s analysis stems from the lives and works of three early Israeli filmmakers: Ephraim Kishon, Uri Zohar and Menahem Golan.

Izhar argues that the work of Kishon and Zohar ushered in a movement away from a collective Zionist identity, instead focusing on the individual (particularly the Israeli male, portrayed as a childish anti-hero). He notes that even when Golan attempted to revive nationalist cinema, he still allowed the anti-hero to sneak in “through the back door…”

Izhar supplements his arguments by placing these films in historical context, particularly the founding of the Israeli nation-state in 1948, the Six Day War (1967) and the Yom Kippur War (1973). He employs primary documents, such as original film reviews and script dialogue, as well as secondary sources, such as the work of later film theorists. In addition to bolstering his analysis, these sources trace the cinematic movements, such as the French Nouvelle Vague and Italian neo-realism, that informed the work of these directors and the critical response to their movies.

At times, Izhar’s analysis is remarkably insightful. For example, he notes that (perhaps inadvertently) Zohar created strong female characters in a predominantly patriarchal environment, marking him a potential feminist. These insights, however, are undermined by a profoundly problematic aspect of the book: the writing itself. Izhar’s grasp of English punctuation, grammar and syntax is tenuous. For example, in his preface, Izhar states that the book “has its own drawbacks, which me ‘the unbiased author’, can’t find Them.”

Run-on sentences abound, as in: “The married neighbors are couple, whose marriage is slowly disintegrates, the Landlady (Stella Avny), asks him if he’s already cheating on Yael, her husband (Baruch David) slowly munching his breakfast, and is oblivious to his wife.”

While From Us to Me contains some compelling insights, it requires drastic editing before becoming accessible to an English-speaking audience.