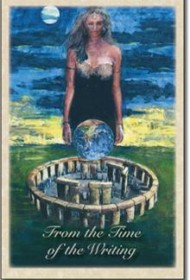 In this unusual flashback through history, the narrator recounts his many incarnations over a period of 1.6 million years. He depicts a simple early life as part of a small nomadic group existing in harmony with nature. Climate and geologic changes through time drastically alter human lifestyles and, ultimately Homo sapiens emerge, which the story’s narrator says “brings a greater aggression than hominids or any member of the animal kingdom has seen before.”

Each rebirth the time traveler experiences, whether as a male or a female, reveals subtle changes in lifestyles, weapons, shelter and language in harmony with climate and geographical changes.

While the story is episodic for the first third of the book, it stabilizes when the traveler is re-born as a boy called Garoke in early Britain. Garoke has a shamanic experience during a ritual that binds him spiritually to the fallen leader of a wolf pack he has killed. He returns to the wolf’s den and rescues the remaining pup, which becomes his companion, hunting partner and protector.

As Garoke moves toward manhood, he becomes aware of Arose, a young uninitiated tribal woman. Their clandestine, unsanctioned meetings end when slave traders attack Garoke and abduct Arose. For his crime, Garoke is banished from the tribe and, with the wolf, begins a Ulysses-type search for Arose that takes him though many adventures. The book then returns to further incarnations of the time traveler, which are briefer and less compelling.

The many changes in time periods can be jarring and give the book a disjointed feel that might have been smoothed with better editing. Convoluted and redundant epilogues (there are two) further diminish the book’s unity. Yet, with its strong sense of time and place, the narrative remains engaging both as a story of human existence and an examination of good and evil. It is likely to appeal to Jean Auel fans, as well as young adults who appreciate ancient adventures.