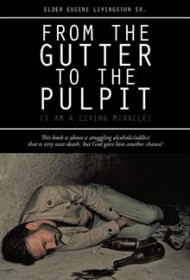 In this ultra-slim nonfiction book, a young man from a religious family on the East Coast falls prey to alcohol and drug addiction before finding redemption.

Elder Eugene Livingston Sr. begins the book with a brief description of his early life as the seventh of 12 children born to a bishop and his evangelist wife in Florida. His father does what he can to raise his children on the straight and narrow, but Livingston is drawn to the lure of alcohol and drugs beginning in high school after the family moves to New Jersey.

With minimalist detail, the author describes his involvement in totaling three vehicles in horrific accidents, yet surviving, and also being attacked in an attempted robbery. These experiences, he says, led him to become clean and sober, a state he’s maintained for the last 25 years, and eventually to become an ordained elder.

Unfortunately, Livingston’s book is awkwardly written and contains only the barest of facts about his life with no introspection. He virtually skips over his 34 years of addiction and offers few details of his efforts toward recovery or how he rose up to the pulpit of a church. The minimal, minor details he offers in his narrative cover random topics from his early upbringing, such as his father teaching him to hunt and taking up boxing in high school. The writing sorely lacks descriptive flair and emotional resonance.

Overall, this book is a germ of an idea that requires much more development to be effective, including a discussion of the lessons the author learned or some sort of insight that could be valuable to others in similar situations. As it stands, it is too perfunctory to have meaning for a general audience.