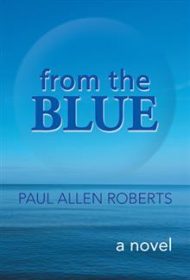 Paul Allen Roberts’s debut historical novel, From the Blue, imagines the members of a primitive island society practicing the mystical faith of their ancestors to survive encounters with the West in 1528–9.

The Condonte Islands are Roberts’s invented, Polynesian-like chain of islands in the South Pacific. Pohii, the islands’ leader, lives in a stone palace with his wife, Iliakahani, and their 18-year-old daughter, Ihilani, both of whom have clairvoyant gifts. The Condonteans face two major threats: 46-year-old Pohii’s illness and the unexpected arrival of ships from Europe.

These Western explorers, disheveled after their long journey, willingly drop their weapons and explain the concept of trade. Captain Gregorio Cristo is invited to the palace for a feast, and Catholic priest Ferdinand decides to stay behind after the rest of the crew departs. Tapping into a newly mystical aspect to his faith, he becomes an elder and spirit guide.

On the uninhabited island of Mokiki, Ferdinand and the islanders find ancient carvings and hieroglyphics that connect the people back to their ancestors. “The blue” is the people’s term for the timeless space where they encounter God and receive messages, perhaps akin to Aboriginal Australians’ “dream time.” The opposite, negative aura is called “the sickness” or “the orange.” Extended passages about the blue are somewhat vague and dreamy, and need to be balanced with more concrete events.

The third-person narration ably shifts between different perspectives, including Iliakahani’s prophecies and Cristo’s ship’s continuing progress.  Island customs provide some of the book’s most memorable scenes. However, making Ihilani’s wedding a brief memory rather than its own sequence is a missed opportunity to depict another ritual.

Introducing another Western character towards the end of the book is an unusual decision but reinforces the notion that this previously undiscovered island chain will continue moving away from isolationism and towards connection. Despite the mentioned issues, historical fiction fans will find this an out-or-the-ordinary adventure tale.