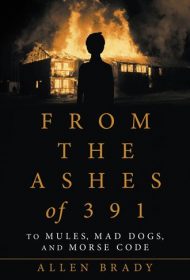 In his memoir, Alabama author Allen Brady shares a collection of memories, observations, and unexpected turns, focusing on “the sweetness of life” with an occasional “bit of its bitterness”

Brady, a red-headed boy with freckles, was raised on a subsistence farm in the backwoods near Montgomery, Alabama, where he lived with his parents and 10 siblings. He remembers fondly sleeping in the same bed with five other siblings; taking the ritual Saturday night bath in a tub heated by a wood-burning stove preparing for Sunday church; spending countless hours working in the fields with his dad.

At 20, Brady joined the military, becoming an ASA (member of the Army Security Agency) and served ten years, one of them in Vietnam. He met his wife, Yoko, after being transferred to Japan.

About one-third of the narrative is devoted to Brady’s war experiences. His job in Vietnam was to listen to, identify, and locate enemy units. Only recently, he notes, has he understood, through talking with a friend, how suppressing war memories negatively affected him.

Uniquely, Brady devotes 14 chapters to specific individuals who impacted him and his family, expanding readers’ view of the era’s culture. He writes, for example, of Annie Ausborne, the midwife and folk doctor in the “colored community,” as it was termed then, who helped “when Mama was having her annual baby.”

Brady demonstrates an impressive recollection of detail and delivers fresh and enlightening language. For instance, he compares his memories to “beggar lice and cockleburs”: “Even those that we would have liked to have pitched aside…they still manage to hold on.” And while the author’s switch from mostly past-tense to present tense in several places can be somewhat jarring, it helps bring readers closer to the story.

The narrative’s length may be off-putting to some, but Brady’s memoir offers compelling insight to both simpler and extremely complex times in our country’s history.