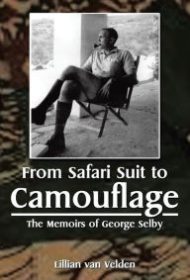 This ghostwritten memoir relates the experiences of a proud former Rhodesian police reservist. As the back cover notes, it follows his life through the 1950s and ‘60s, “when the ‘winds of change,’ blew across the continent of Africa, through the ‘70s and the Rhodesian War…then to the dying moments of that wonderful country he called home.”

For the late George Selby, Rhodesia was “a country we loved and an ideal we believed in,” and he recalls with nostalgic pride not only his school days and the satisfactions of family life but his frequent call-ups as a “reserve policeman” to do battle with black rebels in the half-forgotten killing fields of an African nation now called Zimbabwe. For Selby, the fight was “against communism and violence”—not black self-determination. The former printer’s apprentice and auto-shop worker claims “the Rhodesian war was not a racial one,” despite the fact, omitted from this narrative, that bickering rebel leaders like Joshua Nkomo and Robert Mugabe clearly sought to wrest power from colonialist whites who comprised only 4% of the Rhodesian population.

Much of the book reads like a comfortable pensioner’s diary, describing cars bought, dogs loved and fishing trips taken. It’s written in a lively manner and is most interesting when Selby serves up his version of Rhodesian war history. He rightly describes rebel atrocities but ignores the regime’s war crimes (which included electroshock torture, beatings and head-bashings). Like Rhodesia’s paternalist prime minister, Ian Smith, Selby justifies the defunct country’s defiant white-minority rule on the basis that black Africans were too “inexperienced” to govern themselves without “essential training” by their white overlords.

Selby offers an interesting, but far from balanced, look at this long-raging bloody bush war. While he acknowledges in the book that he is writing about his own experiences, rather than trying to set the political record straight, some readers may find the author’s slant offputting. The book’s ultimate success will likely depend on its audience’s level of enthusiasm for the white supremacist regime that has now collapsed into history.