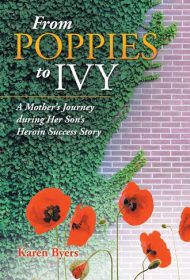 Byers believes Elliott’s problems stemmed partially from a sexual assault at a neighbor’s home at age five. Although Elliott attended therapy after the abuse, the counselling was brief, and Elliott struggled with anger in subsequent years. When Elliott was in high school, Byers discovered that he was smoking heroin. She put him into rehab; quickly, though, Elliott relapsed, returning to in-patient therapy, after which he largely remained sober.

Elliot then earned his GED and was eventually accepted to Cornell. At the book’s conclusion, he is a sophomore and has just successfully completed therapy for alcohol addiction.

Byer’s writing style is direct and poignant, her distress palpable and candid. However, the narrative suffers from some flaws. The 116-page story is divided into 46 chapters, and the author often jumps back and forth in time, making the story choppy and difficult to follow.

Additionally, Byers can, at times, be an unsympathetic character. She liberally and derisively airs her grievances against her ex-husband, even those irrelevant to her son’s addiction. She often lauds the role she played in her son’s recovery. For example, although Byers writes that “It sounds like I had everything to do with my son’s recovery. I didn’t,“ she declares elsewhere that she’s a “tough motherf’er” who made difficult decisions that other parents in similar situations couldn’t; therefore, “so many real-life addiction stories end with an overdose.” Such comments belie the fact that others have done the same, only to see loved ones tragically die from their addictions.

Finally, readers might weary of the author’s adoration of her son. While understandable from any mother, her continual comments on his good looks and talent can grate over time.

Despite such issues, her story is authentic and instructive. Those in similar situations may find helpful ideas here for their own struggles with addicted loved ones.