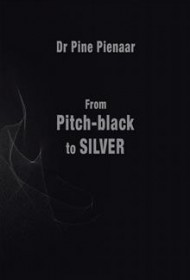 The process of grieving a loss can sometimes be well-captured in a metaphor. Author Pine Pienaar describes the depths of his anguish at the untimely death of his son and the peace he found afterward as moving From Pitch-black to SILVER.

Pienaar’s son died in a boating accident while his father was at the wheel. Beyond that, readers learn little about his life or death, and, despite the lovely metaphor of the title,  the narrative instead leans into more general advice.

In matter-of-fact prose, Pienaar offers many strong opinions about the nature of the afterlife. For example, he writes that “It is not advisable to keep ashes for too long” because they have nothing to do with the deceased. He’s also certain that a dog barking in the house is evidence that the animal has seen or contacted his dead son. Often, he goes off topic to make other observations, such as noting that for most people a protracted illness where the sick person must wear diapers is “worse than death itself.” The author’s observations often seem random and don’t lead to a logical or emotional conclusion.

Near the end, we find an explanation for his approach: Pienaar writes that he “thought that I would end off by telling my story. Somehow, I just cannot get to that point.” Aiming to chronicle his raw grief, he seems to have recoiled from the task, opting for these disconnected observations instead. While he’s to be commended for his honesty, the book suffers both for this “thinking out loud” approach and his inability to share his path from deep grief to a sense of healing.

As written, Pienaar’s story lacks the narrative continuity it needs in order for readers to take comfort from its pages. Nonetheless, From Pitch-black to SILVER shows an author who is trying to help others, despite his own suffering. Readers will admire Pienaar’s heartfelt attempt to find a path out of the darkness.