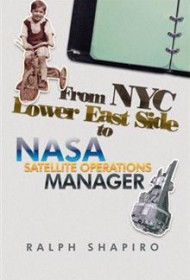 In a memoir as sweeping as its title, From NYC Lower East Side to NASA Satellite Operations Manager, author Ralph Shapiro refers to his insular upbringing in a close-knit, immigrant neighborhood as a “web” that constrained his experience but not his aspirations to become an engineer.

Shapiro’s Jewish mother emigrated from Poland to New York with her family in 1898. His father was a Ukrainian Jew who, with his younger brother, came to New York in 1906; the rest of his family later perished in the Holocaust. The two met while working in the Garment District, marrying in 1910 and starting a family. In 1915, the Shapiros bought a corner candy stand, and later a store.

Born in 1924, the author recalls how the community pulled together to endure the Great Depression and World War II. Shapiro did well in school, feeding his interest in current events and world history. He enrolled in the local community college at 15. In his first job, as a post-war engineer with General Electric, he tested motors for the Navy and electronic cubicles he later surmised were part of the government’s Manhattan Project. This experience, and other jobs along the way, landed him at the doorstep of the National Aeronautics and Space Administration’s Goddard Space Flight Center, where he oversaw satellite development and operations for the next 25 years.

The Jewish history presented by Shapiro, both personal and global, is fascinating and the liveliest part of his book. Unfortunately, the bulk of the story, covering his professional background, reads like a resume, and he skims over his marriage and family life to the detriment of the narrative. The final 50 pages are a tutorial, detailing how scientific satellites work and their contributions to knowledge of the natural world. The average reader will likely prefer less of a primer and more of the human element, making this memoir a decidedly mixed success.