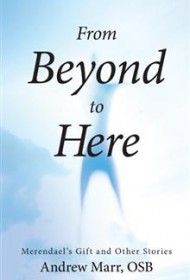 Although the third short story collection from Benedictine monk Andrew Marr (after Born in the Darkest Time of Year and Creatures We Dream of Knowing) is categorized as juvenile fiction, the six stories included within will resonate just as powerfully — if not more so — with adult readers.

Infusing Christian precepts with science fiction and fantasy-powered plots, these stories are not only well written, they’re thematically profound. “Merendael’s Gift,” for example, revolves around an 11-year old boy named Eddie who sees a shimmering apparition that telepathically tells him that it wants to give him its “Gift.” The flickering being, named Merendael, seems friendly and completely harmless, but when other children see the strange creature, they become filled with fear, and soon the entire town devolves into violent chaos as the populace creates militias to hunt down and kill the alien visitor.

Eddie, who at first denies ever seeing Merendael, eventually decides to try to save the benevolent creature from the fearful — and prejudiced — masses. The story’s bombshell of a conclusion was ripe for moralization but Marr skillfully circumnavigates this potential pitfall by using sublime subtlety throughout. At one point, when frenzied citizens surround town hall, Marr brilliantly sneaks in the story’s overriding message amidst the pandemonium. A man wearing a clerical collar is holding a sign that reads: “I Was a Stranger and You Welcomed Me. Matt. 25:35.”

Other compelling stories include: “The Ghost of Swiss Castle,” about two kids attempting to free the ghost of a young boy — and those whose negligence killed him; and “Haunted for a Time,” which revolves around a self-centered boy and a creepy life lesson involving atonement.

Reading this seamless blend of science fiction and paranormal fantasy with Christian mysticism is not only wildly entertaining, it is deeply edifying — literary manna for the soul. Thomas Merton meets Algernon Blackwood.