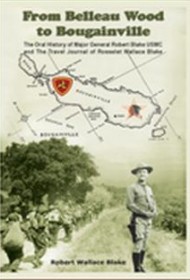 Most of us will never get the opportunity to sit down with a snifter of brandy and interview a major general decorated for valor in two world wars — nor read the personal travel journals of his wife. This book, subtitled “The Oral History of Major General Robert Black USMC and the Travel Journal of Rosselet Wallace Blake,” allows readers the chance to accomplish both, minus the brandy, alas.

Edited more than written, the book is a companion volume to Bayonets and Bougainvilleas, (1st Books Library, 2001). It features an official interview covering Blake’s career, from 1917 through 1949, and a faithful transcription of travel journals written by Rosselet, a 1917 Berkeley graduate.

The verbatim oral history done by and for the Marine Corps suffers from its inherent limitations. One would like more personal reminiscences of the fog and confusion of war, and wishes the tedium of the interviewer endlessly clarifying facts, names and posts would be relieved more often by stories like that of Abie Strauss. When asked how he quit his hospital bed and returned to his unit by stowing away on trains, he responded: “The M.P.’s would get on one end and start walking through, I’d just walk forward. Before they got to me I’d manage to get off and get on the rear end again.”

Similarly, the prose in Rossalet’s travel journals and letters, replete with clubs, teas, castles, gardens, monasteries, cathedrals, “morning suits and gray striped trousers,” could be more engaging. Still, it has its moments, such as: “The music was delightful—Segovia is a well known guitarist, one of Spain’s foremost,” and “Your letter of the seventh of December arrived tonight” (the 26th), a comment that reminds us of times when boats, trains, the mail, handwriting, and social deportment were more significant.

If readers can overlook the book’s flaws, From Belleau Wood to Bougainville accurately offers first-hand accounts of a bygone era.