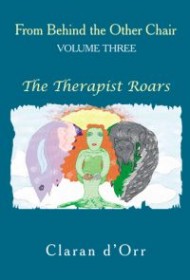 From Behind the Other Chair: The Therapist Roars, by Claran d’Orr, is a densely packed volume of 61 poems. The book is “therapeutic poetry,” according to the back cover, by a licensed marriage and family therapist who found herself later in life afflicted with mental illness so severe she was institutionalized in various settings, including a correctional facility.

In the introduction, d’Orr explains that mental illness is a “microcosm of what is happening worldwide”: spiritual, political, economic and environmental distress. Many of her poems, such as “To Come of Age in a Warring World,” explore these issues in imagery that can be effectively dramatic: “[Angels] turned to me with those eyes / from God’s library, / and all the pieces fallen / were raised in unison, / coupled like the breath / of flames in a holy furnace.” Other poems describe unnamed deities’ disapproval of human destruction: “The gods would stand amazed / … a planet / Panting in dehydration.” This poem’s title, “Dilettante,” is an expression of d’Orr’s criticism of humanity’s immaturity and lack of commitment.)

There’s drama, there’s biblical language — and then there’s just overly busy, a problem that vexes most of this collection. The poem “The Whiplash of Choice,” for example, is accompanied by a photograph of fireworks, an apt metaphor for d’Orr’s abstract, hectic lines: “Should I be plied by a changeling artfully sketched, / or is the looming prevarication self-delineated?” While these questions are potentially engaging, there are too many modifiers; she doesn’t let the ideas come alive through images or concrete details.

While these poems employ a nice range of vocabulary, the collection has a sameness in terms of rhetoric, tone and theme that becomes monotonous. Still, readers who enjoy such subject matter, as well as Romantic-Gothic-esque diction (“ … besmirches my name evermore / In the annals of perpetuity”) will find plenty to chew on in this volume.