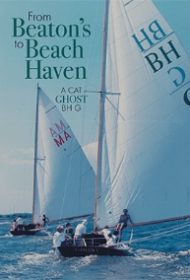 Chances are, most sailing buffs don’t know a lot about A Cats, a small class of racing boat, 28 feet long, 11 feet wide. Only about a dozen of them exist in the water today, and they’re concentrated in a small geographical area on the East Coast. But William Fortenbaugh’s book about the A Cat called Ghost, may bring these catboats to a wider audience.

To explain the title: Beaton’s is short for David Beaton and Sons, a New Jersey boatyard where Ghost was built. Beach Haven is the community where Ghost completed its successful 22-year racing career in 2015 and where it became part of the New Jersey Maritime Museum. BH G represents the Bay Head Yacht Club, and G is for Ghost.

While the book’s cover doesn’t list an author, the publisher credits Fortenbaugh, a former Rutgers University professor who commissioned the building of the boat and was its original owner. (An unsigned Preface notes that it would be a mistake to credit Fortenbaugh, recognizing instead others who contributed.)

The book examines A Cat history, Ghost’s launching and racing accomplishments, its crew and their duties. Mostly though, readers learn about its construction. The second chapter, comprising nearly half of the book, looks at the building of the boat down to the most minute detail, such as the heating system in the boathouse. While this meticulousness is admirable—Fortenbaugh is a skilled writer—it will likely be too esoteric for casual readers.

Similarly, the book is peppered with jargon that will have non-sailors checking Google, as in: “In that way, the camber in the sail is pulled nearer the luff and the leech is made flatter.” Finally, the author includes many unnecessary names of friends that give the book a somewhat insider feel.

Still, with more than 140 color photos and assorted drawings, maps and sketches, this obvious labor of love should appeal to those with a fascination for competitive sailing and A Cats.