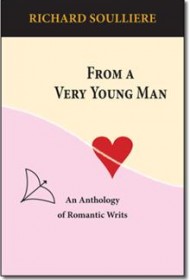 This collection of short stories and poems takes a fairly starry-eyed look at young love and lust. Many of the pieces are written in second person and seem directed to one unidentified woman. Author Richard Soulliere also writes in first and third person and varies the settings from the beach to the Arctic, but generally the theme remains one of great love, often evoking equally intense passion.

While the aim is admirable, the entries present many reading challenges. Some of the stories seem experimental, such as the one-page “A Pretty Long Compliment.” Fashioned as one long sentence, the story is largely undecipherable and likely to lose readers after a few lines.

Other offerings lack the development that would engage readers. In “Loving Rain,” for example, a young couple is forced apart by the girl’s parents’ objections to the young man, but why they object remains a mystery. In “Death Became Him,” a boy and girl are separated by the boy’s family’s move, then reunited 10 years later; the entire story is less than two pages, with the narrator telling readers the story but failing to show why it matters or who these young people really are, leaving readers in the cold.

Many entries read more like letters or journal musings than fiction. In “The World,” the author writes of high school sweethearts: “Personally, I’d have to say that life really sucked the day they were torn apart…Anyway, to make it short and simple, it was geography that tore them apart.”

Soulliere also enjoys metaphors, but they are frequently well over the top, such as: “For hours we screamed out each other’s names louder than the explosion of 100 nuclear bombs.”

The book is well edited and technically correct on matters such as punctuation and the use of dialogue. But overall, these offerings need more expansion, structure and plot intrigue to be of interest to general readers.