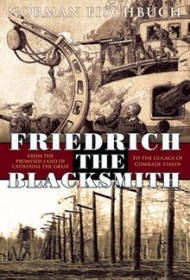 In 1763, Catherine the Great, Tsarina of all Russia, invited German farm families, disenchanted with life in the squabbling principalities of their homeland, to settle in her vast but under-cultivated empire and develop its agricultural wealth. Among those responding were author Norman Fischbuch’s ancestors, who made a new life in Western Russia near the Polish border.

Blending family stories and the personal recollections of relatives in Russia, Germany and Canada with research into the Tsarist and Soviet past, Canadian geologist Fischbuch revisits some of the most tortured years of Russian history. He also tells a painful tale of individual anguish, loss and dislocation.

Beginning in the 19th century when a policy of “russification” suddenly turned the German settlers into pariahs in their adopted country and made an already tense situation nearly untenable, the narrative moves to the disastrous Russo-Japanese War of 1904-5, the beginning of the end of Romanoff despotism. Described from accounts handed down from Friedrich Fischbuch, one of the author’s forbearers, a blacksmith who was conscripted into naval service, the war is portrayed as a chaotic jumble fueled by the rank amateurism of many front line commanders whose positions owed more to cronyism than competence and by frequently bizarre orders coming from St. Petersburg.

From that misadventure, Russia deteriorates further toward the Revolution and the purges of Stalin while the Fischbuch clan finds its status ever more precarious. WWI sees the clan’s members exiled to Siberia as potential enemies because of their ancestry, and when the survivors struggle back home, they find their lands confiscated, their goods dispersed by rampaging Bolsheviks.

Mixing history with the family saga is sometimes confusing and repetitive (especially when the nava3l disaster at the hands of the Japanese is told both factually and as the personal story of Friedrich Fischubuch), otherwise the work is solid with appeal to history buffs. Mostly though, it is a moving story of human endurance in the face of human cruelty.