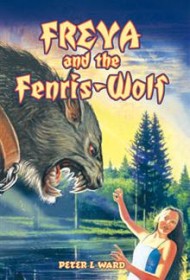 Freya and the Fenris-Wolf is the second installment in Peter L. Ward’s trilogy about several Viking and Saxon teens who stand up to the Norse gods and monsters in 8th-century northern Europe.

Readers will likely enjoy the story more if they have read the first volume, Vimp the Viking’s Epic Voyage; however, in the first few chapters, Ward explains elements of the teens’ adventures that were revealed in the first episode. In brief, the characters sailed across the North Sea after abandoning their homes to save Emma, a Saxon slave girl destined to become a human sacrifice.

As the story continues here, Freya, the character that orchestrated Emma’s escape, is transformed into a seagull just as the group sets foot on Saxon soil. She is forced to fly to Asgard to be judged by the Norse gods for misusing her magical powers while saving the group from a storm. Meanwhile, Emma and the rest try to assimilate into the agrarian life of the villagers, and Lief, the poet, heads to a Benedictine monastery to learn to read and write. As Leif learns more about Benedictine beliefs, readers can expect a clash between the old gods and the new to be at the crux of the conflict and the climax of the story.

Some readers may question Ward’s characterizations. His protagonists seem too modern for 8th-century teens. They frequently use current idioms, and their group dynamic is more suited to present times than a period when arranged marriages of young girls were the norm. The book also would have benefitted by more discussion of the appeal of Christianity and the Benedictine Order to the uneducated Saxon peasants.

On a brighter note, short chapters, numerous illustrations and frequent action scenes in Freya make the novel ideal for young adult readers. In addition, lessons about friendship, loyalty and positive self-image reinforce the value of the book.

The final book of the trilogy, Eric and the Mystical Bear, is also now available.