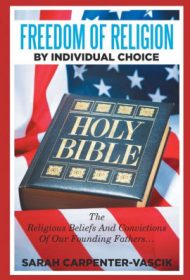 Recent political skirmishes continue to heighten tensions between religious traditionalists who hold that America is a Christian nation and those who support a religiously pluralistic society. Sarah Carpenter-Vascik posits that the tradition of a “wall of separation” between religion and government was a foundational principle of the U.S. The wisdom in this arrangement, she believes, is not only that religion can’t corrupt government, but that government has no power to corrupt religion.

Carpenter-Vascik, an ordained minister, begins with a general history of religion in colonial America, emphasizing the colonists’ diverse beliefs and backgrounds. She recounts the religious developments that occurred between the arrival of the early Puritan settlers and the Revolutionary War, and then dwells on special issues, such as the motto “In God We Trust” and the inclusion of “under God” in the Pledge of Allegiance. This is followed by brief biographies of several Founding Fathers, focusing on their religious views. While the unusual structure—part essays on special topics followed by biography—could be jarring, it works because Carpenter-Vascik ties it together in an introductory essay.

Carpenter-Vascik finds that the Founders were not orthodox Christians according to today’s standards, but rather mostly adherents of Deism—proponents of the views of the 18th century Enlightenment. She sees the Founders as critical of European governments that had been instrumental in 17th and 18th century religious wars; in places, such as England, where there was a State-supported Church, the Church could easily become a political pawn or bone of contention. Thus, the First Amendment forbade Congress from creating any such “Established” Church.

Carpenter-Vascik quotes many letters, papers and other historical documents but, unfortunately, doesn’t give citations enabling readers to evaluate her interpretation of the texts. Her prose also contains many typos and distracting errors. For example, she spells Madison’s name incorrectly in a chapter heading.

Nonetheless, she offers a fresh, approachable starting place for those interested in the topic, one that provides a pointer to better-documented works.