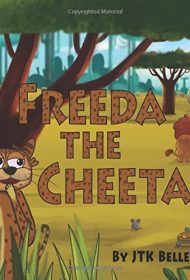 JTK Belle (an acronym/pseudonym for Jeff, Tommy, and Katie Belle) offers a fun tale of animals playing hide-and-go-seek on the African savannah, highlighting a standout player whose name gives the picture book its title, Freeda the Cheetah.

As the story begins, a lion, elephant, zebra, hippo, and many other animals play alongside each other peacefully. The book sets Freeda apart on page 8: “But the very best player of/ hide-and-go-seek/ was Freeda the Cheetah/ of Mozambique.”

The game proceeds, but as the other animals are found one by one, Freeda remains hidden. Although all the animals pitch in to help find her, their efforts prove unsuccessful. The story concludes with Freeda carefully hidden behind a bush, and an interactive challenge posed for readers to find her.

The book’s writing is simple, rhyming and rhythmic, and contains some clever, Suessian turns: “No one knows where she hides/ but they know where she doesn’t/ because the places they looked/ were the places she wasn’t.”

There’s not much more to the plot. Freeda doesn’t get lost or into any trouble, and there’s no lesson conveyed. But this is part of the book’s appeal: it’s an uncomplicated, enjoyable experience for young readers.

It’s important that a book like Freeda the Cheetah, which relies heavily on its illustrations, contain images that hold children’s attention, and that requirement is met with excellent, full color, computer-aided illustrations and well-designed two-page spreads. The book’s final page features a charming, hand-drawn map of Africa, showing the location of Mozambique and the continent’s other countries. One minor issue: Trees at a distance are rendered as tall stalks with horizontal disks representing their foliage, which sometimes makes Freeda’s domain seem like an alien landscape, rather than an African savannah.

Overall, though, Freeda the Cheetah takes a simple concept and executes it with aplomb. The result is a delightful read for elementary school-level children.