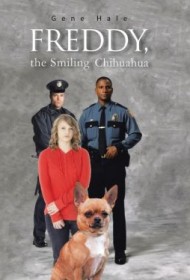 Gene Hale, a family man and dog lover, has written a crime novel featuring one family’s hero: a smiling Chihuahua.

Freddy, the smiling Chihuahua, is adopted by Ashley and Roger Miller as a present for their daughter Amber on her first birthday. Living in Florida, Ashley works as a dance instructor, while Roger is a police officer. Roger’s work as a policeman is uneventful at first, but soon the force begins an investigation to find a serial killing pedophile.

The handsome, rich pedophile, Bryan Simone, had been arrested and tried for murder in New Jersey but was found not guilty. He escapes to Florida under a false identity to continue his exploits and soon becomes called the perfume killer due to dowsing his victims with a perfume his mother wore. Freddy, with his keen sense of smell, is the first to identify the killer, unbeknownst to the Florida police force, by detecting traces of perfume on the man and his van.

Using third-person narration, the author craftily parallels moments in all of his characters’ lives, giving us a rich look at them and even revealing the driving motivations of the pedophile.

However, such strengths are upended by Hale’s stilted and distracting dialogue. Because his characterizations and narration center around this dialogue, what could be an exciting and charming story generally falls flat. (His most effective conversational sections convey the thoughts spoken by the dog characters; there are many minor dog characters complementing Freddy: Tina, Ginger, and Adam to name a few.

While children might have enjoyed the dog element, this is decidedly not a book for young readers, as the story contains detailed descriptions of sexual foreplay between spouses and mating between dogs. And most adults will find the story unconvincing due to the awkward dialogue. The probable audience for the book, then, would be dog lovers who are willing to overlook the awkward human dialogue and enjoy the animal characters.